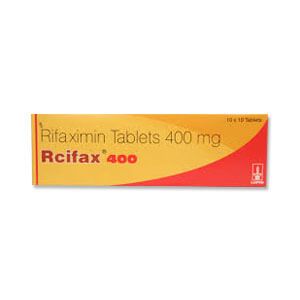 Rcifax 400mg Tablet is an antibiotic. It works by killing the ammonia-producing bacteria in the gastrointestinal tract which reduces recurrence of hepatic encephalopathy.

Rcifax 400mg Tablet is used in irritable bowel syndrome and hepatic encephalopathy. It is also used in the treatment of travelers diarrhea.

Take this medicine in the dose and duration as advised by your doctor. Swallow it as a whole. Do not chew, crush or break it. Rcifax 400mg Tablet may be taken with or without food, but it is better to take it at a fixed time.

Is Rcifax an antibiotic?
Yes, Rcifax is an antibiotic that kills bacteria, which can cause a disease called hepatic encephalopathy (symptoms include agitation, confusion, muscle problems, difficulty in speaking and in some cases coma).

Is Rcifax safe?
Yes, Rcifax is a safe medicine. However, it has its own side effects. It should always be taken for a prescribed duration in prescribed doses as advised by your doctor.

Does Rcifax kill good bacteria?
Rcifax like other antibiotics can alter the normal bacteria in the intestine and this can lead to severe diarrhea.

Does Rcifax work for small intestinal b

Oddway International is a leading wholesale supplier and exportes to China, Russia, USA, UK, Philippines, Singapore, Thailand from India. We are consistently working towards improving the lives of people with complex conditions and chronic ailments by supplying generic drugs at affordable prices. If you wish to order online from India at an affordable price, you just have to fill the "ASK Price" form. We will get in touch with you as soon as your order gets placed. To know more call us at +91-9873336444 or email at [email protected]national.com