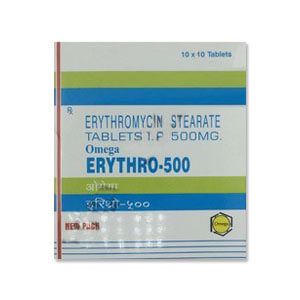 ERYTHRO 500 MG TABLET is a macrolide antibiotic. It stops bacterial growth by inhibiting synthesis of essential proteins, which are required by bacteria to carry out vital functions.

ERYTHRO 500 MG TABLET is used in the treatment of bacterial infections. It is used in infections of tonsils, sinus, ear, nose, throat, skin and soft tissues, windpipe and lungs (pneumonia).

Take this medicine in the dose and duration as advised by your doctor. Swallow it as a whole. Do not chew, crush or break it. ERYTHRO 500 MG TABLET is to be taken empty stomach.

Is Erythro/althrocin/erythrocin/erycin an antibiotic?
Erythro belongs to class of medications called macrolide antibiotics

Does Erythro have sulfa in it?
Erythro does not contain sulfa

Is Erythro safe?
Erythro is relatively safe if used at prescribed doses for the prescribed duration as advised by your doctor